Nigerians usher in 2020 with prayers, fireworks

Nigerians have joined the rest of the world to usher in the new year 2020.

In most parts of the country, many Christians visited various churches where services were held since Tuesday night to herald the New Year.

While the religious citizens were engaged in prayers and thanksgiving services, some Nigerians visited centres and parks where official countdown concerts took place.

The year 2020 first berthed in New Zealand, Australia, Hong Kong, and some other countries before Nigeria. 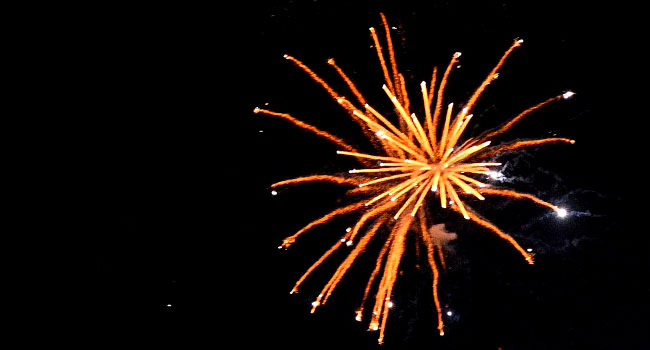 In Nigeria, just as the clock struck 12 am on Wednesday, signaling the beginning of a new year, citizens took to the streets in jubilation across the country.

At some of the centres of attraction in Lagos, fireworks lit up the skies, displaying bright and colourful sceneries.

Although President Muhammadu Buhari is expected to address the nation today, the Senate President, Ahmed Lawan; Speaker of the House of Representatives, Femi Gbajabiamila, and some state governors among other leaders wished the people a Happy New Year.

In his message, the Senate President, Ahmad Lawan, said the year 2020 would usher in robust peace and economic growth for the benefit of all Nigerians.

Lawan congratulated Nigerians on witnessing the end of 2019 and the beginning of the year 2020 and hailed the resilience of the citizens in their commitment to the unity and prosperity of the country, as well as for the administration of President Muhammadu Buhari.

“I have no doubt in my mind that with the timely passage of the budget, restoration of the January to December financial year and other amendments recently made to our laws by the ninth National Assembly, the economy will enjoy significant growth in the new year,” Lawan said.

Mr Gbajabiamila, on his part, felicitated with Nigerians for witnessing the end of the year 2019 and marking the beginning of the New Year, 2020.

The Speaker, who noted that 2019 was remarkable in Nigeria’s history, said he believes 2020 would be better for the citizens.

He added that God has been faithful to Nigerians in the outgoing year and called for more unity of purpose among the citizens.

The lawmaker said, “It’s just like yesterday that we ushered in the year 2019, and in a matter of hours, we will usher another year, 2020. In all, we should thank our Creator for seeing us through the outgoing year and allowing us to see the New Year.

“This New Year, let’s unite more against our challenges. Let’s be our brother’s keepers as always. Our resolve to remain together as a people should be unshakeable.

“We cannot relent in our prayers for continuous peaceful coexistence among us. Let this 2020 be a year of more prospects for the citizens.”

“As an optimist, I have a strong belief that the year 2020 will be better for the country in all ramifications. Let’s not despair. Let’s keep hope alive, and God Almighty will see us through.

“At this moment of celebrations, I join millions of Nigerians to wish my compatriots a prosperous New Year,” Gbajabiamila added.

Similarly, former Vice President and presidential candidate of the Peoples Democratic Party (PDP), Atiku Abubakar, said the coming of the New Year 2020 is symbolic in many ways.

He said, “First, it heralds a brand new decade. Secondly, and probably more important, is that this New Year will require us all to stay together more than ever before to take on, head front, the common enemy of insecurity that challenge our everyday lives as Nigerians.

“I do not share the sentiment when some people claim that the outgone 2019 was a successful year for Nigerians. Such sentiments is reductionist and does the harm of making us have a false sense of victory.

“The bitter truth is that Nigeria is still in the throes of economic instability, with more people losing jobs and the attendant outcome of more children being out of school and more families having hard time in accessing basic needs of life.”

“In this New Year, however, I will rather ask that Nigerians stand together with renewed vigour and determination to battle the hydra-headed demon of insecurity that has plagued us in the past decade.

“We must challenge the inadequacies that made us become the global headquarters of extreme poverty; much as we must work hard and fast enough to eliminate the scourge of out-of-school children in the country. These are the challenges that this new decade has thrown at us and we cannot afford to slumber and submit to defeat,” Atiku added.