South African President, Cyril Ramaphosa, has apologised to Nigeria over the xenophobic attacks in his country.

The country’s special envoy, Mr Jeff Radebe, tendered the apology on behalf of the South African leader when he visited Nigeria on Monday.

Mr Radebe spoke during a closed-door meeting with President Muhammadu Buhari at the Aso Villa in Abuja. 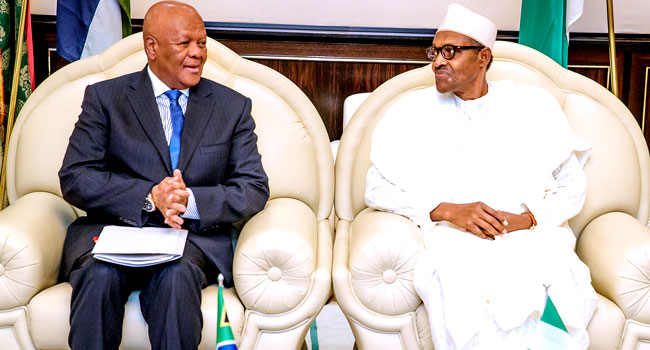 The special envoy presented a letter and conveyed the message from the South African leader to President Buhari.

President Ramaphosa, according to Radebe, said the attacks provided a good opportunity for African leaders to tackle unemployment and inequality in the entire continent.

He added that the issue of compensation to Nigerian victims would feature during President Buhari’s visit to South Africa on October 3.

Meanwhile, Mr Onyeama has confirmed that the Nigerian High Commissioner to South Africa has not been recalled but invited to give a clearer picture of events.

President Ramaphosa had sent special envoys to Nigeria and six other countries over the xenophobic attacks in his country.

This followed a situation in Zimbabwe where he was booed while addressing mourners at late Robert Mugabe’s funeral on Saturday last week.

Apart from Nigeria, the special envoys were instructed to visit Niger, Ghana, Senegal, Tanzania, the Democratic Republic of Congo and Zambia.

The South African leader asked the envoys to deliver messages of solidarity to the Heads of State and Governments of those nations following the attacks on their citizens in his country.

NCOY: FirstBank powering the next generation of Nigerian innovators and entrepreneurs...