A massive fire Monday  afternoon has destroyed both the spire and the roof of the historic and iconic Notre Dame Cathedral in Paris, the second church to be devastated by fire in one month.

While the fire service said the blaze could be “potentially linked” to ongoing renovations, so terrible was its effect that President Emmanuel Macron cancelled a major televised policy speech he was due to give on Monday evening.

Paris mayor Anne Hidalgo in a tweet described it as a “terrible fire”.

“The Paris fire service is trying to control the flames,” she wrote on Twitter, asking residents to respect the security cordon thrown up around the site. 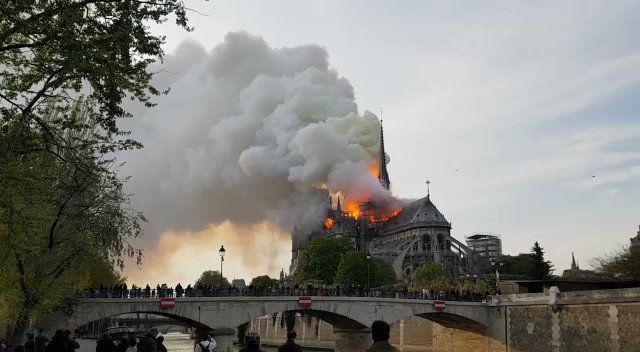 A spokesperson for the cathedral said the fire, which comes as French Catholics prepare to celebrate Easter, broke out at around 1650 GMT.

Fire trucks could be seen speeding through Paris towards the scene on the Ile de la Cite — an island in the Seine at the heart of Paris.

The Paris police department in a tweet called on residents to avoid the area and to “make way for rescue vehicles”.

US President Donald Trump in a tweet said: “So horrible to watch the massive fire at Notre Dame Cathedral in Paris. Perhaps flying water tankers could be used to put it out. Must act quickly!”

Hundreds of people gathered on the bridges of Paris downriver to witness the scene, some filming the images with their smartphones, an AFP reporter said.

The Medieval cathedral is one of the main attractions of the French capital, seeing 12 million tourists a year.

The fire was the second to affect historic churches in Paris, following the one in March that engulfed the St. Sulpice church, built in the 19th Century .

The Notre-Dame, the largest church in the French capital, was built between the 13th and 15th Century. (NAN)

Buhari to Igbos: Forget about Biafra

Nigeria moves up 24 points on World Bank Ease of Doing...