Some students of the University of Lagos (UNILAG) on Friday staged a peaceful protest at Idi Araba to condemn the killing of Dr Stephen Urueye, a medical doctor said to be working with the Lagos University Teaching Hospital (LUTH), who was killed by armed thugs at Idi Araba area.

A report by Channels TV said that the protesters took to the streets in the area, carrying placards with various inscriptions and calling for justice for the victim.

“They alleged that Idi-Araba has been overtaken by armed thugs and called on relevant agencies to beef up security in the area,” the report said.

It quoted one of the students as explaining that they were embarking on the demonstration to call the government’s attention to the dangers students of the institution face living in the area.

The victim was one of the UNILAG graduates f who participated in the school’s convocation held on Wednesday in Akoka.

However, the Lagos State Police Command has yet to confirm the incident.

Sources close to Urueye told Channels Television on Friday that he was rushed to the emergency wing of LUTH on Thursday night after the attack.

He later died on Friday morning after efforts by doctors to keep him alive were unsuccessful. 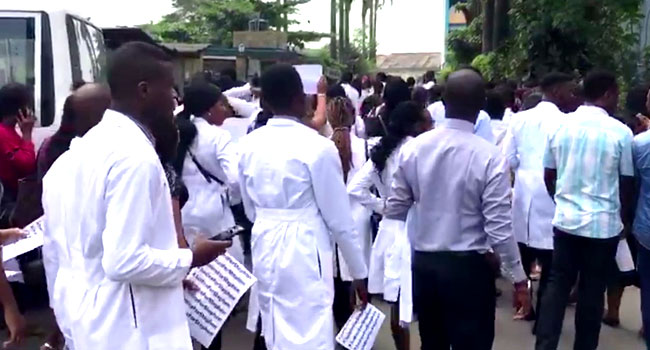 Ikpeazu assures to complete work on 25 Aba roads this year...

Izombe Mayhem: How clash between military and Obele’s gang led to...

Footballers, coach rescued alive after being trapped in cave for 9...